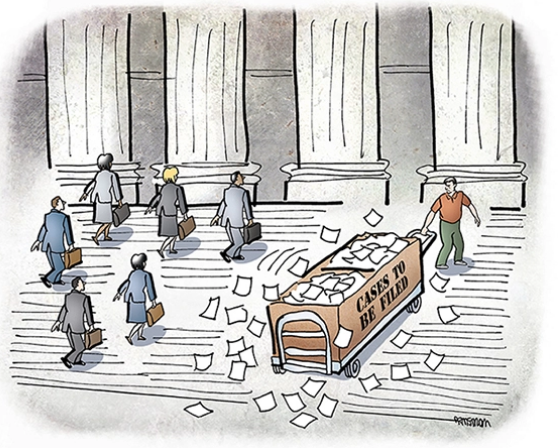 There is a lot we can do on our own to handle disputes without wasting so much time in court.  For example, make sure there are alternative dispute resolution (ADR) provisions in every contract you sign.  ADR provisions require the parties to conduct some sort of a formal confidential settlement conference to try to resolve any dispute, before allowing either party to race to file a lawsuit.  There are a few different ADR processes to consider such as confidential settlement conferences, with or without counsel, mediation, arbitration, etc.   ADR should really be treated as the primary or at least the first dispute resolution process attempted before litigation.

Legislators are trying to do more to encourage and even require people to try ADR first.  Laws now exist to require pre-suit mediation in several causes of action.  Most rules of civil procedure in state and federal courts across the country now empower judges to order ADR, usually mediation, before proceeding to trial.  These are all certainly steps in the right direction, but they have proved to be not nearly enough to stem the continuous flood of new lawsuits.

Here is an idea how to incentivize people to do more to solve their own problems BEFORE filing suit.   Let’s amend the rules of civil procedure to provide that if at least one party has requested pre-suit mediation, then the other parties are obligated to participate or otherwise face some consequences in any lawsuit that may follow.  For example, if before filing suit, one party wants to sit down and try to settle through mediation or any other reasonable ADR process, but the other party refuses, then allow the party seeking ADR to recover additional damages, such as a portion of their attorney fees and legal costs incurred in any ensuing lawsuit.  Courts could also treat pre-suit ADR, if requested by at least one party, as a pre-condition, such that judges would be allowed to dismiss (without prejudice) or at least suspend legal proceedings until the ADR requested by a party is at least attempted.  Such amendments to the court rules puts more teeth into ADR and promotes the self-determination of the more enlightened party, the one who has tried but been unable to engage the other parties in a private ADR conference to try to settle their differences without going to court.

Subramanian
Hi Your idea about legislation to try ADR process before litigation is an absolutely wonderful idea and i wish this becomes the norm in every major country governed by rule of Law! Thanks Subramanian India
Reply